FEATURES INCLUDED AT NO EXTRA CHARGE We Offer Accoutrements In Sets and As Single Items. All our C.S. Accoutrements are custom made here in our shop in Neosho. They are hand sewn with hand waxed linen thread and made of top grade leather. The period finish is hand applied to finish out the items. Each item is a faithful copy of its original counterpart. These are museum quality C. S. Accoutrement Sets suitable for use in reenacting, museum exhibition and for collectors of a dying art form.

This set made by Wellborn, Nichols & Oliver of Dalton, Georgia consisted of a Waist Belt  with Buckle, Cap Pouch, Tin Tip Bayonet Scabbard and Cartridge Box.  Historic Note: General McCulloch's Troops were know to have received 2,500 of these sets in the Fall of 1861 prior to the Battle of Pea Ridge. Click here to view copies of the Invoice, Abstract of Issues and Shipping Records relating to this issue to McCulloch's Troops.
Wellborn, Nichols & Oliver Accoutrements are available as a full set or you may order individual pieces.

Save on shipping by selecting the full set or a combination of individual Wellborn, Nichols & Oliver Accoutrement items.

This C. S. Arsenal Baton Rouge La. Arsenal Set is a detailed copy of an original accoutrement set consisting of Cartridge Box, Cap Pouch, and a Waist Belt  complete Fork Tongue Frame Buckle. We were the first to reproduce these sets, our copies were viewed by the owners of the original and judged first rate.  I was told that  Confederate made ammunition such as the .58 Gardner bullet fits perfectly in the tins.
The Cartridge Box has Waist Belt Loops only. This box was based on the measurements for the  U.S. pattern of March 1857.  Roughly speaking, a .58 caliber box that is about one-half inch short.  The set was originally issued with two styles of Cap Boxes, either square flap or the 1850 style. Both style boxes have double waist belt loops.  Choose one when ordering

We have been asked for a set that includes the Houston Depot Cartridge Box, a Cap Pouch, a Bayonet Scabbard and a Belt that could be used as a set.

THIS IS NOT A KNOWN SET THAT THE HOUSTON DEPOT ISSUED. But it is comprised of the Houston Cartridge Box and a russet brown colored Cap Pouch, Bayonet Scabbard and Single Billet Belt that will make good companions for the Houston Box. Again this is NOT AN ISSUED SET but is offered for the convenience of our customers who have requested we offer a set with the Houston Box.

The large CS and Ordnance Department mark found on the original Cartridge Boxes are strikingly reproduced on this box. The box is approximately .69 caliber. The belt is a russet colored Single Billet Belt with 7/8 inch roller buckles. 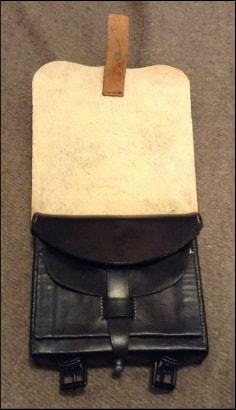