Below we share with our customers some of the interesting things we came across during our research on this featured shoe.  We hope you will find these as interesting as we did as our research went forth.

The Pre-War Years
Before the war Stephen Putney was a partner in two large boot and shoe partnerships in Richmond.

Putney and Watts benefited from the outbreak of the Civil War. Richmond was the only large-scale industrial city controlled by the Confederacy during most of the Civil War. The city's warehouses were the supply and logistical center for Confederate forces. The city's Tredegar Iron Works, the 3rd largest foundry in the United States at the start of the war, produced most of the Confederate artillery, including a number of giant rail-mounted siege cannons. The company also manufactured railroad locomotives, boxcars and rails, as well as steam propulsion plants and iron plating for warships. Richmond's factories also produced guns, bullets, tents, uniforms, harnesses, leather goods, swords, bayonets, and other war materiel. A number of textile plants, flour mills, brick factories, newspapers and book publishers were also located in Richmond. While smaller than the shipyards controlled by the Union in Norfolk the Confederacy did have the shipyards in Richmond.

The city's loss to the Union army in April 1865 made a Union victory in the Civil War inevitable. With Virginia firmly under Union control, including the industrial centers of Richmond, Petersburg and Norfolk, the mostly rural and agricultural deep south lacked the industry needed to supply the Confederate war effort. 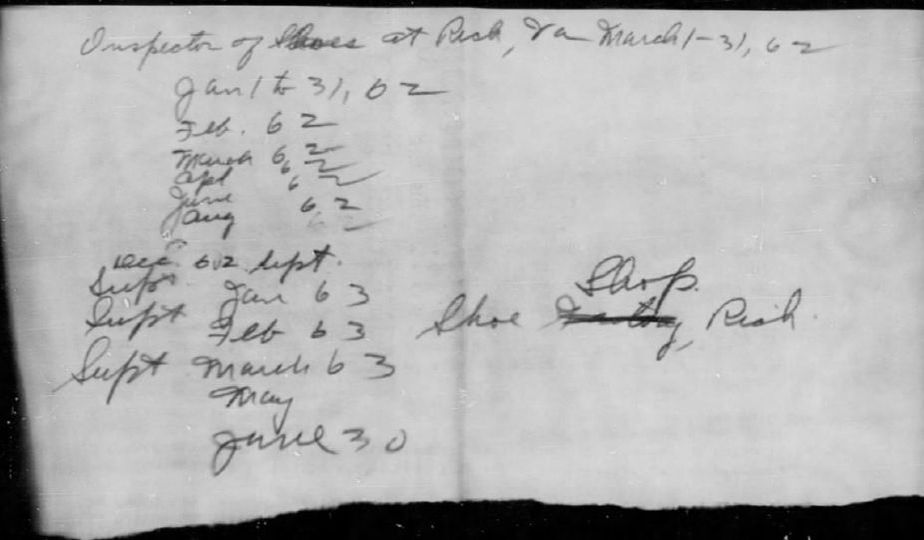 Then eight days later on June 25, 1863 Colonel Myers requested that Pvt. Stephen Putney be appointed a Captain and report  for duty in the Clothing Bureau.  (See below.) 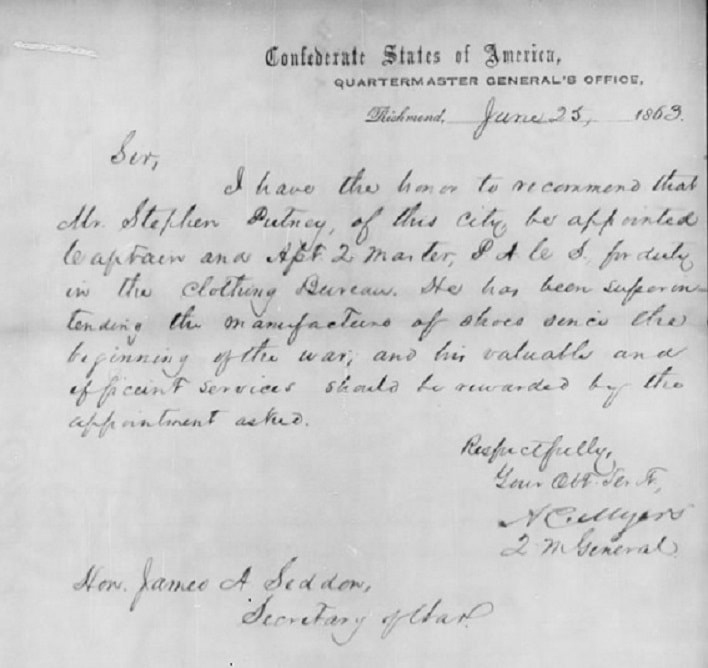 June 25, 1863 letter from Colonel Abraham Charles Myers (first quartermaster-general of the Confederate Army) to James Alexander Seddon, Confederate States Secretary of War requesting that Stephen Putney be appointed Captain and report  for duty in the Clothing Bureau.  “ He has been superintending the manufacturing of shoes since the beginning of  the war, and his valuable and efficient services should be rewarded by the appointment ask.” 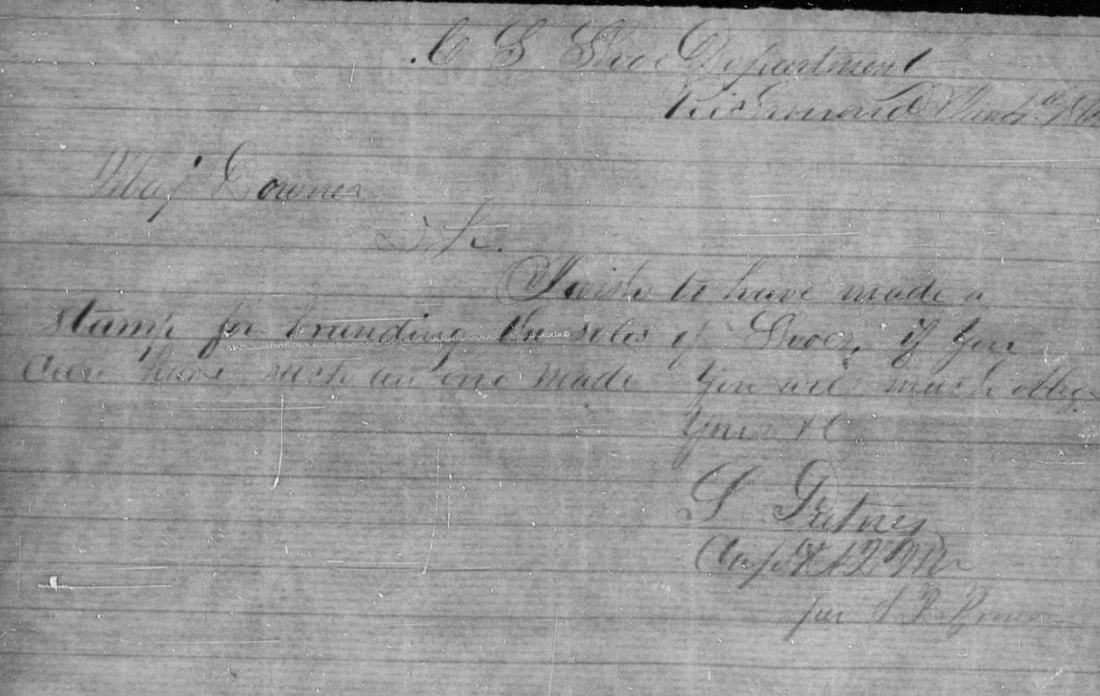 Above-Letter dated  1864 to W. S. Downer:  Superintendent Richmond Armory from Captain Stephen Putney requesting a new replacement stamp to mark the footwear with "CSA" as can be seen above on the sole of  the original shoe.
Another account of Lee Visiting the factory can be found in Obituary at bottom of page.

On May 29, 1865, President Andrew Johnson provided for amnesty and the return of property to those who would take an oath of allegiance. However, former Confederate government officials, officers with the rank of colonel and above from the Confederate army or lieutenant and above from the Confederate navy, and people owning more than $20,000 worth of property had to apply for individual pardons. Thousands did ask for and receive amnesty. Among them was Stephen Putney who on May 1, 1865 signed his Oath Of Allegiance. On August 2, 1865 he sought amnesty from President Johnson.

Stephen Putney's Oath Of Allegiance,  amnesty documents and obituary are copied below. 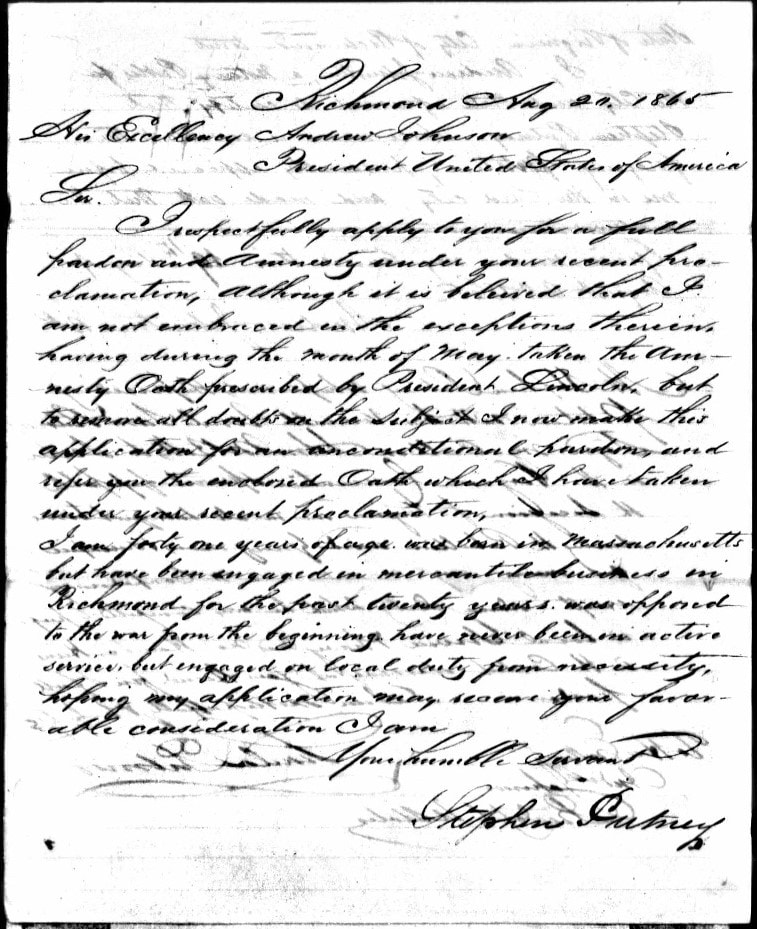 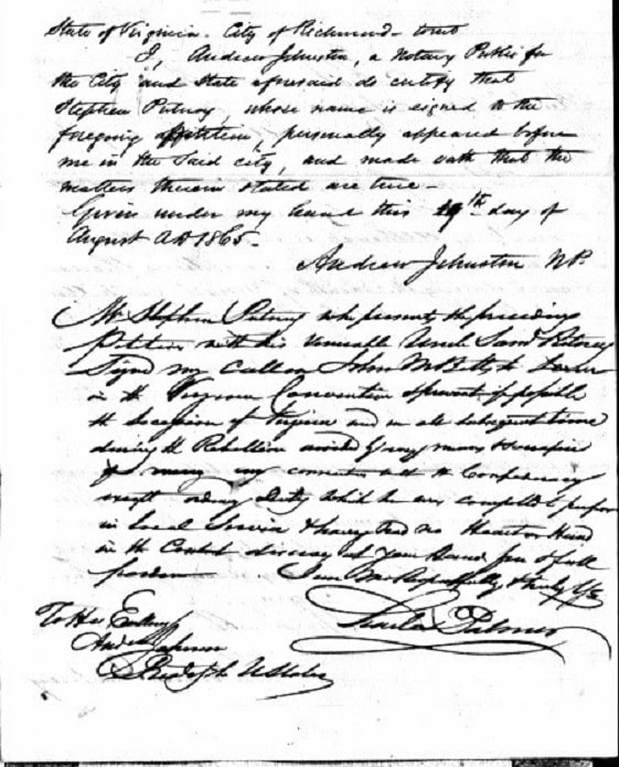 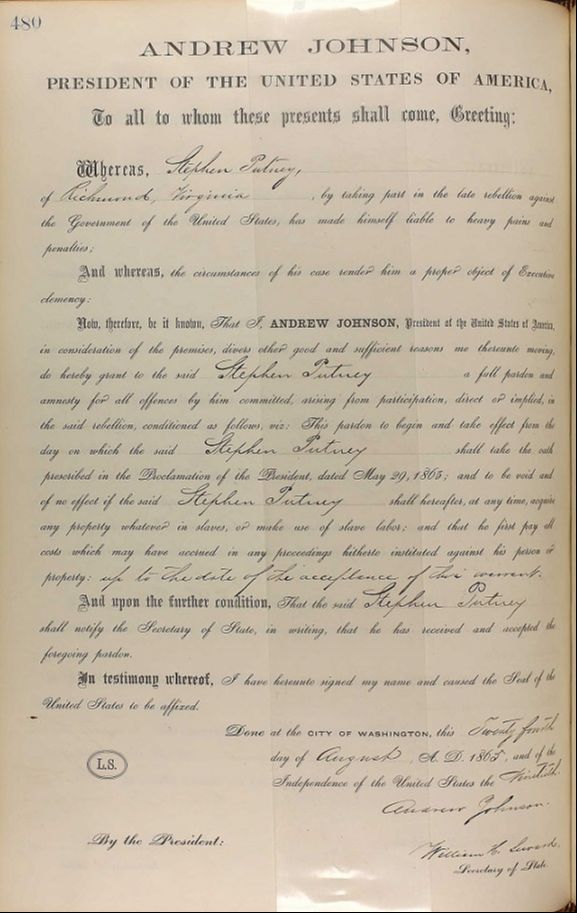